Kyocera to equip soccer stadium in The Hague with 2,900 solar modules

After the Stade de Suisse in Bern, Switzerland, it is Kyocera Solar’s second major project in the European sporting world: The installation of the 2,900 Kyocera solar modules at the KYOCERA Stadium in The Hague will begin this year. 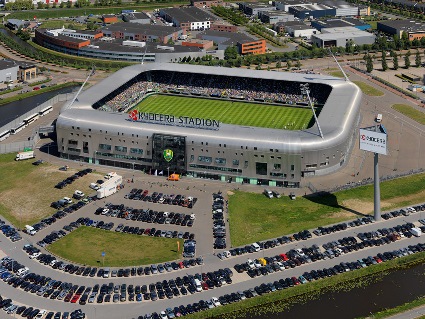 KYOCERA stadium in The Hague

22nd of January the signing of a letter of intent in The Hague signalled the start of another major solar project in connection with professional sports in Europe. The roof of The Hague’s soccer stadium is to be equipped with Kyocera solar modules. However, the plans of the signatories, namely the city of The Hague, Kyocera Fineceramics GmbH, NV ADO Den Haag soccer club, Croon Elektrotechniek, Oskomera solar power solutions, Rabobank, Steeds and Vrolijk Technical Services, go further than just equipping the stadium roof with solar panels.

The system is made up of 2,900 solar modules and has a planned total output of 725 kWp. That will make it one of the biggest building-based photovoltaic projects in the Netherlands. The Kyocera Stadium project will allow CO2 emissions to be reduced by up to 272 tons a year and will provide the electricity required by around 200 homes. That means the project will make a valuable contribution to The Hague’s plans to become carbon neutral by 2040.

“Today we have made another important step in terms of the use of solar energy in the sporting world. The innovative stadium concept in The Hague will not only be of benefit to its operators, but also to visitors to the stadium and the residents of The Hague, because it will help the city achieve its goal of climate neutrality,” said Rafael Schröer, Managing Director Germany of Kyocera Fineceramics GmbH.

The stadium is the home of the first-division Dutch soccer team ADO Den Haag and has a capacity of 15,000 spectators. In addition to soccer, the stadium is used for field hockey games. The construction work is set to take place this summer, immediately after the end of the Hockey World Cup, which will use the stadium.

Kyocera set the standard for the use of solar technology in the sporting world in 2004 when the company built what was at the time the world’s largest stadium-based solar power plant at the Stade de Suisse in Bern, Switzerland. The 8,000 solar modules installed there have since produced an annual output of 1,124,045 kWh.

Headquartered in Kyoto, Japan, Kyocera Corporation is one of the world's leading manufacturers of fine ceramic components for the technology industry. The strategically important divisions in the Kyocera Group, which is comprised of 228 subsidiaries (as of April 1, 2013), are information and communications technologies, products which increase quality of life, and environmentally friendly products. The technology group is also one of the largest producers of solar energy systems worldwide, with more than 4,0 gigawatts of solar power having been installed around the world to date.
The company is ranked #492 on Forbes magazine’s 2013 “Global 2000” listing of the world’s largest publicly traded companies. With a global workforce of about 71,000 employees, Kyocera posted net sales of approximately €10.58 billion in fiscal year 2012/2013. The products marketed by the company in Europe include laser printers, digital copying systems, microelectronic components, fine ceramic products and complete solar power systems. The Kyocera Group has two independent companies in the Federal Republic of Germany: Kyocera Fineceramics GmbH in Neuss and Esslingen and Kyocera Document Solutions in Meerbusch.
The company also takes an active interest in cultural affairs. The Kyoto Prize, a prominent international award, is presented each year by the Inamori Foundation — established by Kyocera founder Dr. Kazuo Inamori — to individuals and groups worldwide who have contributed significantly to the scientific, cultural, and spiritual betterment of humankind (converted at present €372,000 per prize category).