Kyoto, Japan / Neuss, Germany, March 29, 2017. Kyocera Corporation announced that it was recognized as one of the 2016 Top 100 Global Innovators by Clarivate Analytics, a worldwide information solution provider. Kyocera’s patent success rate and global reach were identified as outstanding for 2016, the company’s third consecutive year receiving the award. A trophy was presented earlier this week at the company’s headquarters in Kyoto, Japan. 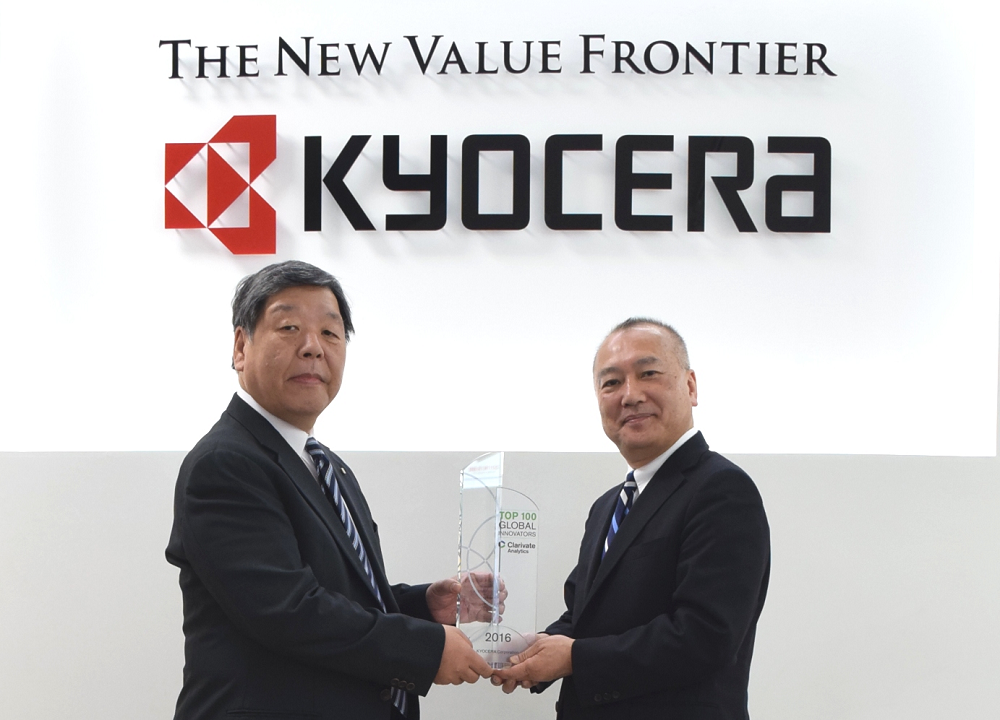 The Top 100 Global Innovators awards have been presented annually since 2011 to recognize leading enterprises and research institutions for their innovative efforts. Honorees are selected by Clarivate Analytics after an analysis of intellectual property and patents using Clarivate’s original methodology. The awards were originated by Thomson Reuters.

Candidates are evaluated by patent and citation data across four main criteria: “Volume,” “Success,” “Influence” and “Globalization.” Among the above factors, “Success” and “Globalization” led to Kyocera’s recognition as one of the world’s top innovators.

Kyocera has a tradition of innovative research and development, as well as a deep respect for the intellectual property rights of others. Kyocera recently opened an additional patent office in Europe (Germany), which follows similar offices established in Japan, the U.S. and China, to maximize IP development and protection. Europe is one of the most important markets for the Kyocera Group, especially for automotive and environmental related products. As promising intellectual property rights, Kyocera holds a diverse range of patents including smartphone related technologies, wireless technologies pertinent to IoT, and applied technology for piezoelectric devices. In 2016, Kyocera Group companies obtained a total of 1,132 patents in the U.S., according to the top 1,000 list that U.S. IFI CLAIMS Patent Service announced in January, 2017.

Headquartered in Kyoto, Japan, Kyocera Corporation is one of the world's leading manufacturers of fine ceramic components for the technology industry. The strategically important divisions in the Kyocera Group, which is comprised of 235 subsidiaries (as of March 31, 2016), are information and communications technologies, products which increase quality of life, and environmentally friendly products. The technology group is also one of the oldest producers of solar energy systems worldwide, with more than 40 years of experience in the industry.

The company is ranked #531 on Forbes magazine’s 2016 “Global 2000” listing of the world’s largest publicly traded companies.

With a global workforce of over 69,000 employees, Kyocera posted net sales of approximately €11.59 billion in fiscal year 2015/2016. The products marketed by the company in Europe include printers, digital copying systems, microelectronic components, and fine ceramic products. The Kyocera Group has two independent companies in the Federal Republic of Germany: Kyocera Fineceramics GmbH in Neuss and Esslingen and Kyocera Document Solutions in Meerbusch.

The company also takes an active interest in cultural affairs. The Kyoto Prize, a prominent international award, is presented each year by the Inamori Foundation — established by Kyocera founder Dr. Kazuo Inamori — to individuals and groups worldwide who have contributed significantly to the scientific, cultural, and spiritual betterment of humankind (converted at approximately €360,000 per prize category).

For more information about KYOCERA: http://global.kyocera.com