Kyocera's new PG chipbreaker for inserts offers excellent chip control and a high level of cutting edge stability. The new product ensures high levels of productivity in the process of medium roughing and roughing steel. Other innovations from the company include the CA510 and CA530 CVD-coated carbide grades for steel machining, which complete the CA5 series. Another new development is the opening of Kyocera's first high-tech production site in India, in the city of Jamshedpur, which represents the latest stage in the company's expansion plans.

Kyoto/Neuss – Inserts from Kyocera provide perfect results under a wide variety of conditions throughout the steel machining process, from precision machining to roughing. The new PG chipbreaker allows for excellent chip control, and also prevents the formation of shavings and the possibility of chip biting. 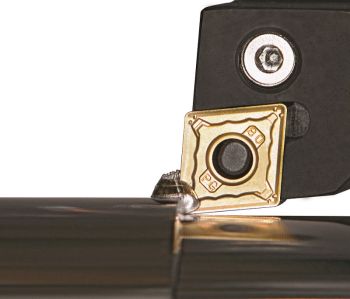 The design of the PG chipbreaker's cutting edge ensures maximum efficiency during the steel machining process. The newly developed chip geometries make optimum chip control possible at cutting depths between 1 mm and 4 mm and within a feed rate range of 0.15 mm to 0.45 mm per revolution.

The new CVD coating technology used in the CA5 series and, in particular, in the two new grades CA510 and CA530 results in a long tool life.

This makes a major contribution to increasing productivity during medium roughing and roughing processes.

A stronger local presence in an emerging market

Kyocera is not only expanding its portfolio of products. The company has also recently built its first production facility in India, which started trial operation in December 2013. The factory has a floor area of 7000 m2 and has begun producing 100,000 inserts per month. There are also plans for toolholders to be manufactured at the plant in the future.

Kyocera's aim in opening its new factory in the eastern Indian city of Jamshedpur, which goes under the name "Kyocera CTC Precision Tools Private Limited," is to meet the rapidly growing demand for industrial cutting tools in this emerging market. One contributing factor is the increased demand for industrial machinery, in particular in the automotive industry.

To date, Kyocera’s cutting tool business has four sales offices and a technical centre in India. The new plant gives the company a stronger presence in this important economy. Kyocera will continue to base its activities on a "three-pillar system", consisting of sales, technical support and production.