Breakthrough KYOCERA Audio Technology for Mobile Devices Transmits Clear Sound Even in the Noisiest Environments; Will Demo for First Time in Europe at MWC 2013

Have you ever wanted to turn down the volume on the world around you as you struggled to hear your mobile phone? Had to run to a quiet place so you could simply hear a mobile call? Well that can be a thing of the past thanks to the new, proprietary Smart Sonic Receiver audio technology from Japanese high-tech manufacturer Kyocera. Instead of competing with the myriad sound waves constantly surrounding us, mobile phones with the Smart Sonic Receiver don’t even have speakers. They employ a special tiny component that creates vibrations on the screen, which are transmitted via body tissue directly to the eardrum and inner ear. This technology is not just a futuristic concept; it is already available in several recently introduced Kyocera mobile phones in Japan and the U.S. It also will be demonstrated for visitors to experience for the first time in Europe at the GSMA Mobile World Congress 2013 (Hall 5; Booth 5B86) from February 25-28 in Barcelona, Spain.

Building on Kyocera's 53-year heritage in advanced ceramics (the company’s name is a contraction of KYOto CERAmics), the new technology uses a Kyocera piezoelectric ceramic actuator to turn sounds into vibrations. The actuator is connected to the phone’s screen module, thus turning the whole display area into the sound source. It uses twin paths to get sounds to the user, creating sound waves in the air like a traditional speaker, while also creating vibrations that are carried by body tissue. Placing the phone in contact with the general area of the ear creates clear sound even in very noisy environments like cafes, sporting events, concerts, work zones and more. As an added benefit, removing the phone’s traditional speaker eliminates the need for a speaker cavity in the phone's housing, enabling cleaner aesthetics and enhanced waterproofing capabilities.

Among the various commendations that the technology has received since being announced, Kyocera's Smart Sonic Receiver technology was notably selected from thousands of new products and innovations by Popular Science magazine editors and contributors to make the top 100 winners in the 2012 “Best of What’s New” Award. The magazine’s editors found the technology “worked so well — and so imperceptibly — that it eliminated the need for a conventional speaker altogether.”

“Smartphone technology has improved immensely over the years, with one exception — sound quality, especially when dealing with overwhelming background noise,” said Eric Anderson, general manager and senior vice president of global sales and marketing at Kyocera Communications Inc. “We’ve all experienced the frustration of being in the middle of an important call and not being able to hear in a noisy environment — even with the speaker maxed out or when using an expensive headset accessory. Sound from the Smart Sonic Receiver goes directly to the eardrum with crystal clear sound quality.”

Currently, Smart Sonic Receiver technology is available in Japan in the stylish URBANO PROGRESSO smartphone, the K012 ‘Simple Mobile Phone’ for elderly users, and the ‘DIGNO S’ LTE smartphone with enhanced battery life and rapid charging capability. Moreover, the technology will be featured in the recently announced Kyocera Torque ruggedized LTE smartphone, which will launch in Q1 2013 in the U.S. 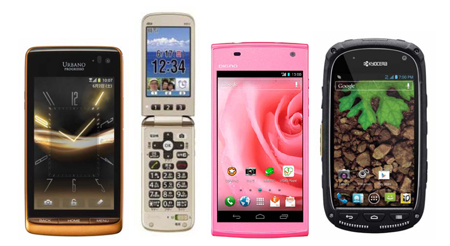 At Mobile World Congress, the world’s largest mobile-industry trade show, Kyocera will give hands-on demonstrations of the Smart Sonic Receiver technology. The company also will showcase a wide variety of mobile phones for global wireless carriers that meet the real needs of real people around the world — from sleek and attractive 4G/LTE smartphones to ruggedized, practical push-to-talk devices.

For more information about Kyocera at the Mobile World Congress: http://global.kyocera.com/prdct/telecom/consumer/mwc2013/