Continually building on its long track record of waterproof devices both in Japan and the U.S.

Kyoto/Neuss – Over the past couple of years, Kyocera Corporation has made a name for itself in the waterproof and rugged mobile-phone space. Since 2008, the company has launched more than 40 waterproof devices, highlighted by the award-winning DIGNO Series in Japan and the Hydro Series, Dura Series and ultra-rugged Torque in the U.S. At GSMA Mobile World Congress (MWC) 2014, taking place from February 24-27 in Barcelona, Spain, Kyocera’s booth (Hall 5 Booth 5E20) will feature the company’s wide-ranging line of waterproof smartphones and feature phones and original technologies — including demonstrations of its proprietary Smart Sonic Receiver speaker-less audio technology for mobile phones.

Some of the main products on display will include the waterproof Hydro ELITE available through Verizon in the U.S.; and the MilSpec Torque smartphone (LTE/CDMA) which has received sterling reviews for its ultra-rugged, waterproof features since its launch last year in the U.S. through Sprint. An LTE/UMTS version of the Torque also has recently been announced for sale in Japan on the NTT DOCOMO network starting in March. Other products from Japan on display include the waterproof, sleek and lightweight DIGNO M, which just won a prestigious international “iF product design award,” as well as concept devices showcasing technologies Kyocera designers have their eyes on for the future.

Furthermore, for those who have yet to experience first-hand Kyocera’s proprietary Smart Sonic Receiver audio technology, the company will be offering demos of this unique, proprietary technology at its booth throughout the show. This technology uses a Kyocera piezoelectric ceramic actuator to turn sounds into vibrations. The actuator is connected to the phone’s screen module, thus turning the whole display area into the sound source. It uses twin paths to get sounds to the user, creating sound waves in the air like a traditional speaker, while also creating vibrations that are carried by body tissue to the eardrum. Placing the phone in contact with the general area of the ear creates clear sound even in very noisy environments like cafes, sporting events, concerts, work zones and more. As an added benefit, removing the phone’s traditional speaker eliminates the need for a speaker cavity in the phone's housing, enabling cleaner aesthetics, more screen space, and enhanced waterproofing capabilities. 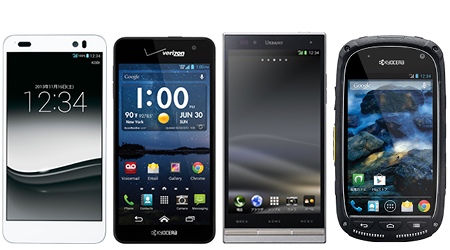