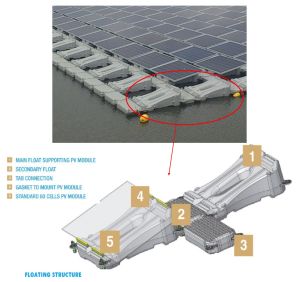 Kyocera and Century Tokyo Leasing jointly established Kyocera TCL Solar LLC in August 2012 for the purpose of constructing and operating multiple utility-scale solar power plants in Japan under the country’s feed-in-tariff system, which commenced in July 2012. Since the company launch, it has constructed 28 solar power plants, of which 11 plants have begun operation.

Due to the rapid implementation of solar power, securing tracts of land suitable for utility-scale solar power plants is becoming more difficult in Japan. In addition to ground-mount systems and rooftop systems for factory buildings and warehouses, Kyocera TCL Solar will start the floating solar power generation business utilizing the country’s abundant water surfaces. Due to great variation in the amount of rainfall by season, there are many reservoirs throughout Japan for agricultural and flood-control purposes.

Kyocera TCL Solar plans to develop floating installations for reservoirs in the country totaling approximately 60MW by the end of this fiscal year (March 31, 2015). The installations will utilize floating solar platforms developed and patented by Ciel et Terre, which have a proven record of success during more than three years of operation in France.

Under the business, Century Tokyo Leasing will provide finance for the installations, and the Kyocera Group will undertake the supply of solar modules and related equipment in addition to construction, maintenance and operation. Ciel et Terre will be responsible for the supply of floating solar platforms as well as technical input for installing the systems on water. Through the business, the companies hope to contribute to the expansion of renewable energy and development of a low carbon society.

Overview of the project in Kato City, Hyogo Prefecture

* World’s largest floating solar power plant in terms of output (as of August 29, 2014)
** Based on an average use of 3,600kWh per household. Source: Federation of Electric Power Companies of Japan