Kyoto / Neuss − Kyocera Corporation announced today that Kyocera is the only solar module manufacturer to rank as a Performance Leader in all six categories in independent testing by PV Evolution Labs, as reported in GTM Research’s July 2014 PV Module Reliability Scorecard. 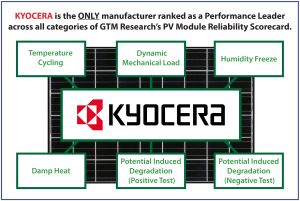 “With the exception of one manufacturer, Kyocera, no company consistently ranked within the Performance Leaders group for all test regimens,” GTM Research noted. “Results showed that most producers that performed well in one test did not necessarily perform well in all tests.”

“Kyocera has proven time and again, both in independent testing and by solar modules performing uninterruptedly in the field for decades, that our modules are able to consistently produce clean, renewable energy even in the harshest conditions,” said Steve Hill, president of Kyocera Solar Inc. “GTM Research’s Reliability Scorecard is an important tool for investors and developers who seek independent verification that Kyocera modules exceed world-class levels of quality and reliability and are the best choice for their solar installations.”

“Two-thirds of today’s cumulative solar capacity has been installed within the last three years, and PV installations are forecast to quadruple by the end of the decade, growing from 128.3 GW at the end of 2013 to 528.1 GW by the end of 2020,” GTM Research stated. “Against this backdrop of strong demand, any systemic quality issues would affect an exponentially increasing proportion of PV projects.”